New Zealand Ruff'n'Tuff 250: Our Cooper car takes out the Southern round 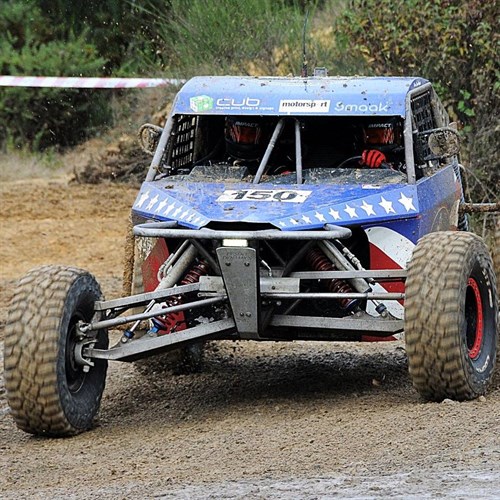 Our Cooper car driver John Morgan has taken out the 2018 Southern round of Ruff’n’Tuff 250:

“Northern racer John Morgan has won the 2018 Ruff'n'Tuff 250, the opening southern round of the 2018 ORANZ New Zealand offroad racing championship."

“Driving his Desert Dynamics Chev two-seater race car, Morgan powered past pole man Dyson Delahunty on the opening lap and was never headed, driving a perfectly judged race that ended with the chequered flag and a final margin over second-placed Bob Uttridge of more than three minutes.

Delahunty, driving a stock-standard Polaris RZR, had taken pole with a 1:21.215 for the 1.3 km qualifying sprint, with Morgan lining up in the single-file grid on P2 with a 1:23.047.  Northern drivers filled the top three grid positions, with Brendon Midgely third on 1:24.377.

Off the start, Morgan was quickly past Delahunty in the seven kilometre 'conrod' straight that followed the start. He was never again challenged. Fellow North Island drivers Mike Fraser, Alan Butler and Lance Cargill were all looking to chase him down, as were a swarm of S class UTVs, but Morgan was untouchable and was able to adjust his speed to remain so.

Throughout the race, punctures were the order of the day for many, especially in the JG Civil U and S UTV classes. More than seven would return to the pits to replace flat tyres, mostly rears after hitting logs or rocks on the fast course. Also suffering flat tyes were Mike Fraser, Trevor Cooper and Nelson racer Greg Winn, who were all racing in the same unlimited class as Morgan. Fraser and Winn both flayed a rear tyre, Fraser’s flat putting them down the race order while tyres were changed and brake lines checked for damage.

Fraser set out on a charge back up the race order, but Winn’s weekend ended when he hit a log while trying to overtake Brent McDonald’s Can Am UTV, the impact tearing off part of the car’s front suspension and frame.

Trevor Cooper's first flat tyre was changed on the side of the road, his Jimco Champion one of the few cars in the field that carries a spare tyre; however, he lost his power steering in the process and when he returned to the track with a two-lap deficit he crashed in slow going at the start-finish area and was out of the race.

Meanwhile, his dad Kevin was driving an older class 3 racer with Nissan power and having an epic race, duelling with locals Cam Stratford and Grant Adamson.

Dyson Delahunty’s spirited drive in JG Civil S class came to an end six laps from home when the Polaris blew its transmission’s drive belts, leaving him stranded. He had fallen behind the charging Bob Uttridge, who had started fourth, climbed to second on lap two, dropped to third in a dramatic battle with local driver Greg Winn, then regained and held second place to the flag.

JG Civil U class went to Rosco Gaudin ahead of ex-pat American Cameron Reeves. Gaudin ran hard all day and rose from 17th at the start to finish sixth overall.

In the 4WD Bits truck category Nelson's Darrin Thomason was first home, climbing from a start position of 22 all the way to ninth overall at the finish and winning class 4 in his Mitsubishi Pajero Evo. The drive had taken him to seventh overall until the truck destroyed its rear diff, forcing him to complete the final laps with front drive only; he was given back four minutes for helping a competitor who had gone off the road in a danger area – this gave him an official placing of seventh. He also set the fastest lap of any truck on the day, 16:44.490.

In the trucks Grant Rosenburg was next home and first class 8 truck. Finishing Chang

There were no such worries for John Morgan, who had only to manage his pace without a close rival through the whole 240 km distance.

The victory lands the northern driver a full 72 points heading into the second round, a two-day event at West Melton near Christchurch.” 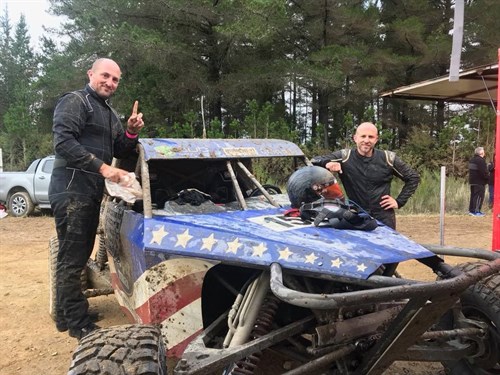 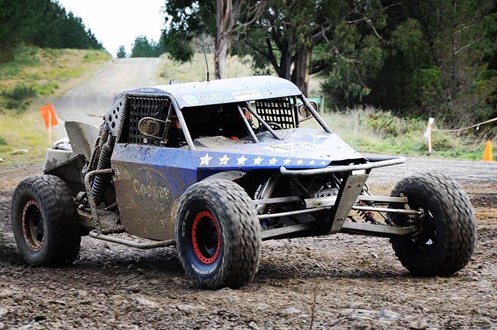